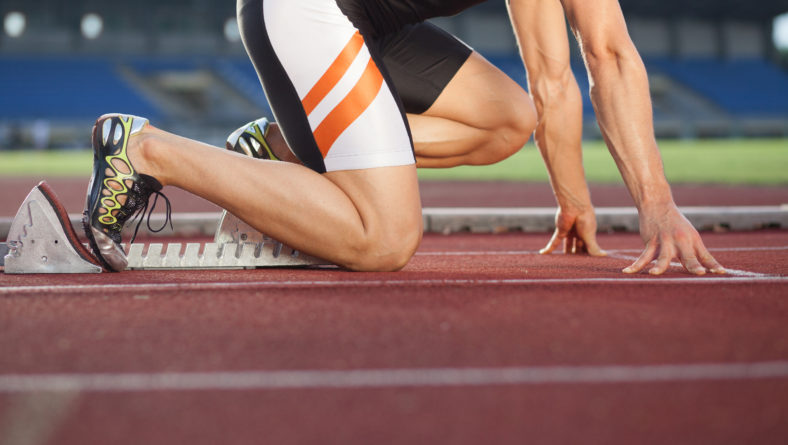 As athletes, we know that our ability to move fast is a foundational component to our success on the field or court. The individual who can run faster, change direction more efficiently and react to the ball quicker has the competitive advantage. To begin to understand how to increase our ability to move and react faster, we must first examine the principals behind speed.

Speed is 3-dimensional. Many people think of running, playing and moving as just forward and backward, but if you look deeper you realize there is a lot of side to side and twisting/turning movement involved as well. This shows us that speed is multi-planar in nature. In fact, most athletes spend more time transitioning and changing direction during their game or practice than just simply moving forward. We can move, run, shuffle forwards, backwards, side to side, and turn left and right. A sound speed program must then address speed in terms of not only the sagittal plane (forward and back), but in the frontal (side to side) and transverse (twisting) planes as well.

Speed is a chain reaction. In order to effectively move at our maximal output, we need our entire body to become involved. Our feet, knees, hips, spine, shoulders, and head can all help or unfortunately hurt our ability to move fast and efficiently.

Speed is a loading action. In order to run, shuffle, or move effectively we know that we must load the body’s tissue to create an explosive ability. As we begin our running stride, first we must have the ability to elongate our body’s tissues to efficiently create a spring like reaction to explode horizontally across the field or court.

Speed is reaction. When we are on the field we are constantly reacting to the ball, our opponents, our teammates and so much more. We must be able to make the right split-second decisions, change directions quickly and efficiently at the exact right timee to have a positive impact on the play.

The Body:  Speed is made up of a variety of actions that players perform in a number of different ways, manners and needs. Speed is made up of a combination of lunging, squating, reaching and has many locomotion components like running and shuffling. When developing a training program to become a faster athlete, we must realize that our running and shuffling are usually combined with a variety of different actions. As athletes, while we are running we are also reaching for the ball, stick handling, passing, shooting, pivoting, stick checking, changing direction, checking, dodging and the list goes on. Even the action of running itself has different depths, stride lengths, stride rates, toe positions, hand positions, and head positions all on the same shift of a single player. There are times where we are on one foot and others on two. Sometimes we are turning left with our lower body and twisting our upper body to the right to catch a pass. Our body must be prepared to handle and out rival our on field opponents by staying strong and fast in those different positions.  Therefore, a proper speed-training program must take into consideration all of the different possible positions an athlete will be in and additionally the actions the athlete is simultaneously performing. A program that focuses only on speed in the traditional manner (for example: just forward sprinting in practice) without taking into consideration the different actions simultaneously taking place is incomplete, unrealistic and will have little effect on overall player speed. A player that wants to improve their speed and reaction must prepare their body (muscles, bones, joints) from the foot up to be flexible, stable, quick and powerful in the variety of positions mentioned in all three planes of motion.

The Brain:
Our brain being a component of our body’s speed and reaction is a fairly new thought process but is backed by research. Brain training or cognitive conditioning is showing to be just as important as physical conditioning. Top players and coaches are beginning to appreciate the benefits of training the brain as it relates to speed and reaction. Cognitive training is important because its the brain that controls the movement of the body. During your sport, the critical movements and plays are typically split-second decisions made by the you the athlete. If your decision making or brain speed is slow, then your physical play will be slow, no matter how physically fast you may be. A proper speed program must involve cognitive conditioning, so quicker and better split-second decisions can be made.
What is Speed:  Now that we have identified the components of speed and the simultaneous actions that take place, it is important to define and understand speed before we begin our training. The Gray Institute defines speed as “the spontaneous, instantaneous, and subconscious capacity, to flexibly assemble transient biomechanical solutions to changing conditions; while effectively and efficiently completing functional task demands, within an optimal period of time.”  Let’s quickly simplify that definition and put in terms of an athlete. On the field we must be able to quickly and subconsciously recruit our muscles, bones and joints in the most efficient way to explode toward the desired direction/s in an environment that is constantly changing. Speed consists of all 3 planes of motion and involves how quick we can accelerate, decelerate and even change direction. The last piece of the definition, “within an optimal period of time,” is also very important. Most speed training programs focus only on max output of speed, but in real life scenarios the best athlete is the one who is fast AND arrives at the exact right time to make the play. There are many instances when an athlete can arrive too fast or too slow to an area on the field which effectively takes them out of the play. We now know that our brains decision making ability plays an important role in timing our movements right as well. Speed is all about timing.

Take your game to the next level. Dynamic Health and Fitness has the coaches, programs, and tools to improve your speed and reaction. Learn more HERE.